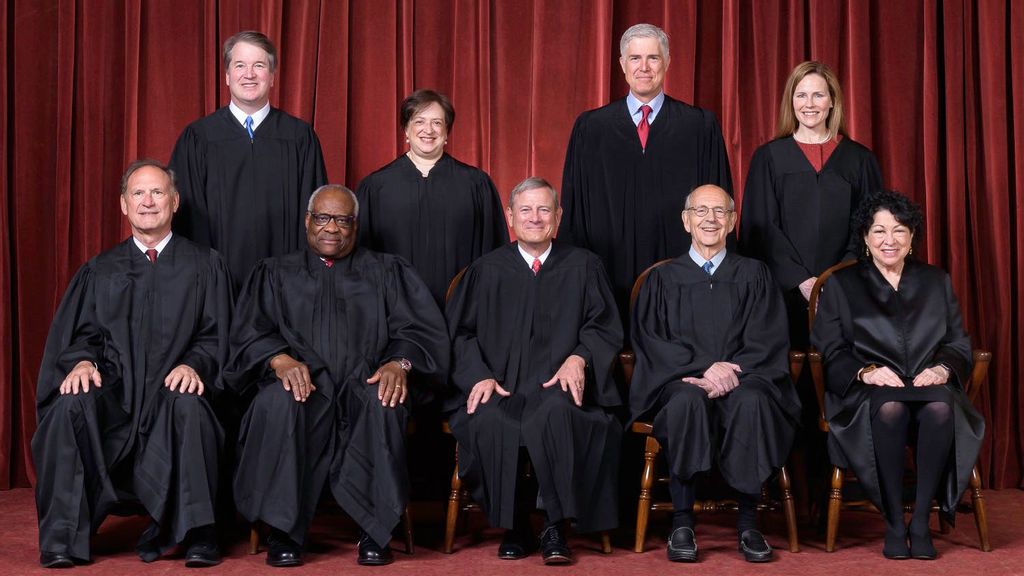 The president pledged to nominate the first black woman to the Supreme Court.
The post Calls Grow For Biden To Name Supreme Court Picks To Pressure Justice Breyer To Retire appeared first on Zenger News.

WASHINGTON — A pledge from President Joseph R. Biden Jr to nominate the first black woman to the U.S. Supreme Court has come into renewed focus amid pressure on Associate Justice Stephen G. Breyer to retire while Democrats can replace him.

Breyer, 82, was nominated by President Bill Clinton in 1994 and has faced calls from some within the Democratic Party to stand down, so Biden can choose his successor.

The court has had a 6-3 conservative majority since President Donald J. Trump and a GOP-led Senate named three justices to its bench, and Democrats are wary of history repeating itself by their party losing out on a nomination.

Trump then selected the conservative Amy Coney Barrett, 49, to replace her, despite the 2020 presidential election being less than two months away, prompting the Republican-controlled Senate to confirm her on a party line vote.

“The fact that Obama did not succeed with his last nomination does put some pressure on Stephen Breyer — the oldest sitting justice to have been appointed by a Democrat — to resign and give Biden at least one chance,” John R. Vile, a professor of political science at Middle Tennessee State University, told Zenger News.

“Some Democrats still fault Ginsburg for staying on so long rather than resigning under a Democrat president,” he said.

Breyer has shown no indication he plans to retire while the president is a Democrat. But Biden, equally, has not issued a public list of potential nominees to replace him — as Trump did to win over skeptical conservative groups while he was still a candidate.

In 2016, Trump released his shortlist “seemingly as a political tool to help assure conservatives of the seriousness of his commitment,” said Stephen Wermiel, a constitutional law professor at the American University Washington College of Law.

Were Biden to follow suit “it would become a political distraction,” he said.

Pre-selecting future Supreme Court justice picks before vacancies occur goes against the conventional wisdom of what works in Washington, said Ilya Shapiro, director of the Robert A. Levy Center for Constitutional Studies and a vice president at the Cato Institute.

“But we could see a dynamic going forward that Republican candidates do to make sure that they can be trusted, [while] Democrats don’t. We’ll see. Or it could just be that Donald Trump was a such a unique candidate that he needed to do that,” Shapiro said.

Although Biden has demurred on picks, some Democratic-leaning advocacy organizations such as Demand Justice have posted their own shortlists, as have many media outlets.

Two names on several of the shortlists are Ketanji Brown Jackson, a district court judge in the District of Columbia, and Leondra Kruger, an associate justice on the California Supreme Court.

Biden nominated Jackson to the Court of Appeals for the D.C. Circuit to replace Garland, one of 20 federal judicial nominations the White House made this year. A full Senate vote is expected this week after she passed out of the Senate Judiciary Committee on a 13-9 vote, with two Republicans joining Democrats to support her.

For many, the Biden administration’s silence so far was not an indication that the president was rethinking his promise to select a black woman, should a justice like Breyer retire.

“I don’t read anything into that,” said Tricia “C.K.” Hoffler, the president of the National Bar Association and chair of the Rainbow PUSH Coalition, explaining that she thought the Biden administration may simply be declining to take cues from his predecessor.

With changing demographics at the nation’s law schools, there are “many, many” black women with the credentials, experience and judicial temperament to serve, she said.

In any case, the extent of how Biden might reshape the court will likely be limited.

President Jimmy Carter did not have an opportunity to name any justices. Since then, Clinton and Obama, both Democrats, each seated two justices, but four Republican presidents — Ronald Reagan, George H.W. Bush, George W. Bush and Trump — have together seated 10 justices, with Trump seating his three during a single term.

One result of those Republican-led changes, Middle Tennessee State University’s Vile noted, is that while there “used to be a single ‘Catholic’ seat and a single ‘Jewish’ seat on the Court … now there are six Catholics, two Jews and one Episcopalian.”

The high numbers of conservative-leaning justices on the court opens up the possibility of overturning — or simply ignoring — Roe vs. Wade, the 1973 Supreme Court ruling that made abortion a legal right in all 50 states, which has long been a goal of many conservative groups.

The shift in the balance on the court has also already provided more votes in other cases to limit access to abortion, such as Planned Parenthood vs. Casey, which upheld Roe’s finding of the right to get an abortion, but reduced scrutiny on states seeking to curtail the right.

In May, the Supreme Court announced it will soon be hearing a number of cases that could challenge old decisions, including Dobbs v. Jackson Women’s Health, which centers on a Mississippi law barring abortions after 15 weeks. Other cases soon to be before the court involve voting rights, civil rights and police reforms including “qualified immunity.”

However, since it takes a vote of four of the nine Supreme Court justices to accept a given case, any new Biden appointee would have little immediate sway over the court’s agenda.

Breyer is also not the longest-serving associate justice, despite his 26 years.

At 72, Associate Justice Clarence Thomas — a George H.W. Bush appointee — is 10 years younger than Breyer but in his 29th year on the bench. Most of the other justices, however, are in their 50s or 60s — with Trump-nominee Barrett the youngest at 49.

Since being elected, Biden has signed an executive order to form a commission tasked with suggesting reforms to the Supreme Court. Some touted ideas include establishing term limits for justices and controversial calls to expand the number of justices beyond nine.

A constitutional amendment would be required to take lifetime tenure away from the justices — but the number of justices is set at nine only by the Judiciary Act of 1869.

But Shapiro, from the Robert A. Levy Center for Constitutional Studies, said the Biden administration would be wary about making any such significant changes to the court.

The political difficulties of “court packing” by expanding the benches beyond nine justices could be too much, and any changes to the court would struggle to survive the Senate.

Facts: Had chickenpox in the 60’s and wasn’t required to take the vaccine in the 90’s.

So why give covid vaccine to those with antibodies? We don’t have the “science” to make this recommendation.