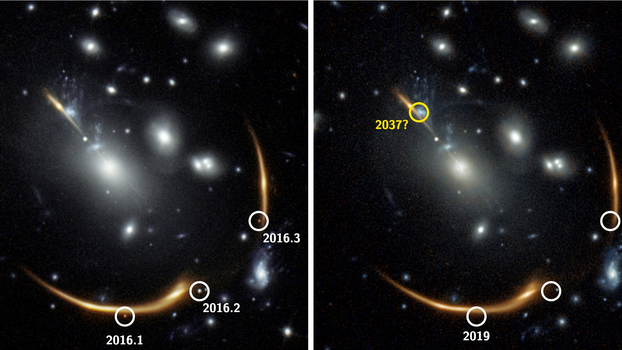 Galaxy clusters bend light and space, creating delays in observing phenomena around them.
The post Supernova Observed For The Third Time Due To Curved Space, And Scientists Predict A Fourth Sighting appeared first on Zenger News.

The light from the death of a star 10 billion years ago has finally reached Earth, with scientists recording three separate sightings and predicting a fourth.

Einstein’s theory of relativity claims that gravity is not an independent force but the result of space and time being warped by the presence of a mass. So it is the curving of space, caused by heavy objects, that makes planets spin around stars and bends light beams.

This “gravitational lensing” was observed and recorded by an international team of astronomers tracking a single supernova at three different points in space.

“A single star exploded 10 billion years ago, long before our own sun was formed. The flash of light from that explosion has just reached us,” said Gabriel Brammer of the Cosmic Dawn Center at the University of Copenhagen, co-author of the study published in Nature Astronomy.

Evidence of the supernova, known as “SN-Requiem,” was captured by three out of four mirrored images of a distant galaxy. Each image presents a different view of the supernova’s evolution, but in the final two images, the explosion has not yet occurred. By examining how galaxies are distributed within the cluster and how these images are distorted by curved space, astronomers can calculate the delay in receiving the images.

This has led them to make a remarkable prediction. “The fourth [sighting] of the galaxy is roughly 21 years behind, which should allow us to see the supernova explode one more time, some time around 2037,” said Brammer.

Galaxy clusters comprise hundreds or even thousands of galaxies. As the heaviest of all structures in the universe, they bend light from distant galaxies behind them so drastically that they appear to be in a completely different location than where they are.

However, light can take several paths around a galaxy cluster, allowing astronomers to make two or more sightings of the same galaxy at different points in the sky using the infrared range of the Hubble Space Telescope. Light takes longer on some routes around a galaxy cluster than others. Stronger gravity results in a slower route — another consequence of relativity. This staggers the amount of time needed for light to reach the observer, producing different images.

By analyzing the Hubble data, researchers noted three bright light sources in a background galaxy that were evident in a previous set of observations from 2016, which disappeared when Hubble revisited the area in 2019. It turned out that the telescope had captured three images of a single star’s explosive death.

If astronomers are able to see the SN-Requiem explosion again in 2037, it will confirm their understanding of gravity and also offer clues to the mystery of the universe’s expansion.

Although researchers can already measure the rate of expansion, the various methods of measurement do not produce identical results. As a result, astronomers question whether their observational techniques are flawed or whether their understanding of the universe must change.

“Understanding the structure of the universe is going to be a top priority for the main Earth-based observatories and international space organizations over the next decade. Studies planned for the future will cover much of the sky and are expected to reveal dozens or even hundreds of rare gravitational lenses with supernovae like SN-Requiem,” said Brammer.

The post Supernova Observed For The Third Time Due To Curved Space, And Scientists Predict A Fourth Sighting appeared first on Zenger News.

@waltermasterson @POTUS @SpeakerPelosi @CDC we are 18 freaking months into this pandemic — folks ALL know what's expected of them. This sort of bullshit harassment of folks trying our damndest to stay healthy/safe/ALIVE is getting REALLY old.

The CDC chief, Dr. Walensky, went against her own agency’s advisers to push through Pfizer boosters for “frontline workers.” Walensky made her decision in the middle of the night last night proving that the @CDC is a reckless politically-driven shitshow. #nightmare 🥴
View on Twitter
89
0