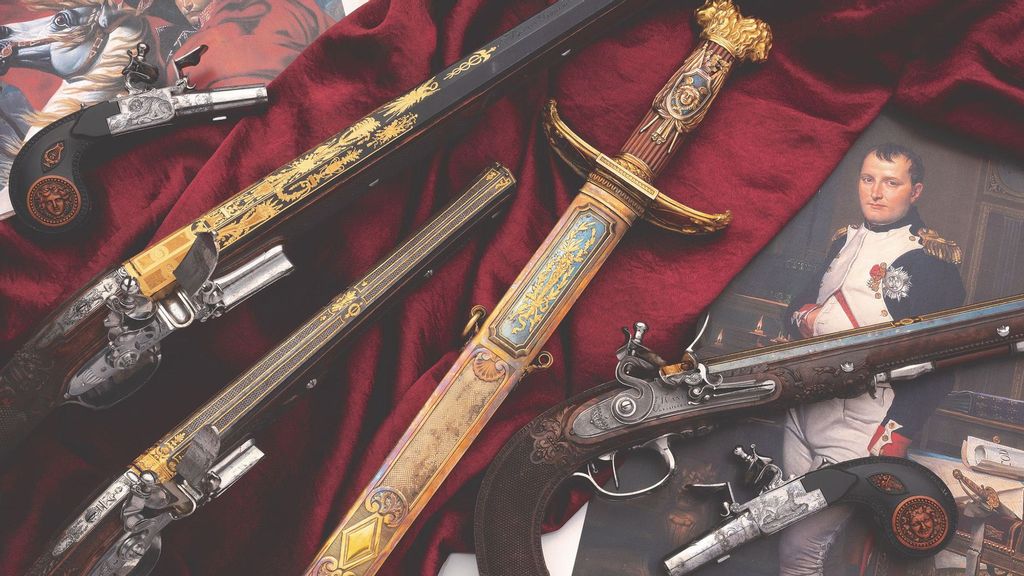 Guns and other historic weapons belonging to the emperor are estimated to fetch between $1.5 million and $3.5 million.
The post Sword Used By Napoleon To Gain Control Of France Set For Auction appeared first on Zenger News.

A sword used by Napoleon Bonaparte to seize control of France when he chased the revolutionary government out of office, leading to his becoming emperor, is set to be auctioned.

The sword, in a collection with other historic weapons belonging to Napoleon, is estimated to fetch between $1.5 million and $3.5 million, according to Rock Island Auction Company.

“The sword is the one Bonaparte carried in his hand when he drove the Council of Five Hundred out of St. Cloud and became in consequence First Consul,” the Illinois auction house said.

Napoleon was First Consul from 1799 to 1804, after which he declared himself emperor.

The historical event, also known as the “Coup of 18 Brumaire,” is generally acknowledged as the event that ended the French Revolution.

“The Napoleon Garniture is among the most symbolic set of arms from the French Revolutionary wars and Napoleonic wars and dates back to when Napoleon was rising to power in the French Republic,” the auction house said.

“The placement of this sword at the ousting, comes straight from the catalog of the set’s first exhibition in 1816 at the Oplotheca in London. This was at No. 20, Lower Brook Street, Bond Street, and promoted by Thomas Gwenapp. In that exhibition’s catalog, among other significant items, Napoleon’s Garniture is listed as No. 17.

“The Met Museum contains a drawing of this exhibition, and a case labeled ‘Bonaparte’ can be seen in the back right corner.

“It is unknown if Napoleon carried it in subsequent battles, but presentation arms were seldom used in combat.”

In 1804, the auction house said, “after crowning himself emperor, he presented the set to another general, his close friend, Gen. Jean-Andoche Junot.”

The auction house said the lot of six pieces includes “a rifled carbine, carriage pistols, pocket pistols, and a distinctive sword and scabbard. Dubbed the “Napoleon Garniture,” it is being sold as a single lot from Dec. 3-5.

The Rock Island Auction Company will also host a public preview day on Dec. 2. Bids can be placed on the auction house website, as well as in person or over the phone.

During the auction, items that belonged to Elvis Presley, Brigham Young, Annie Oakley, and a member of the infamous Dalton Gang, are also going under the hammer.

The auction house said the auction is in honor of the 200th anniversary of Napoleon Bonaparte’s death.

The auction house has sold numerous items belonging to famous historical figures, including a revolver owned by John Wayne, which sold for $517,500. The revolver was used by Wayne in the films “True Grit,” “Rooster Cogburn” and “The Cowboys,” the auction house said.

The post Sword Used By Napoleon To Gain Control Of France Set For Auction appeared first on Zenger News.

Also, the @CDC and @WhiteHouse should prioritize testing neutralizing antibody titers just as much as giving people boosters, since there is so much COVID in the wild. Someone vaccinated who recovers from COVID post-vaccination may have a better, more up to date immune response.
View on Twitter
4
0

Mini Nazi is a lying pain‼️
“People should, if they invite people over their home, essentially ask, maybe require people show evidence that they are💉” #FireFauci
@CDC has repeatedly admitted💉people still catch and spread Covid, show your papers anyway!
https://t.co/XSt9MqXqyd
View on Twitter
131
0