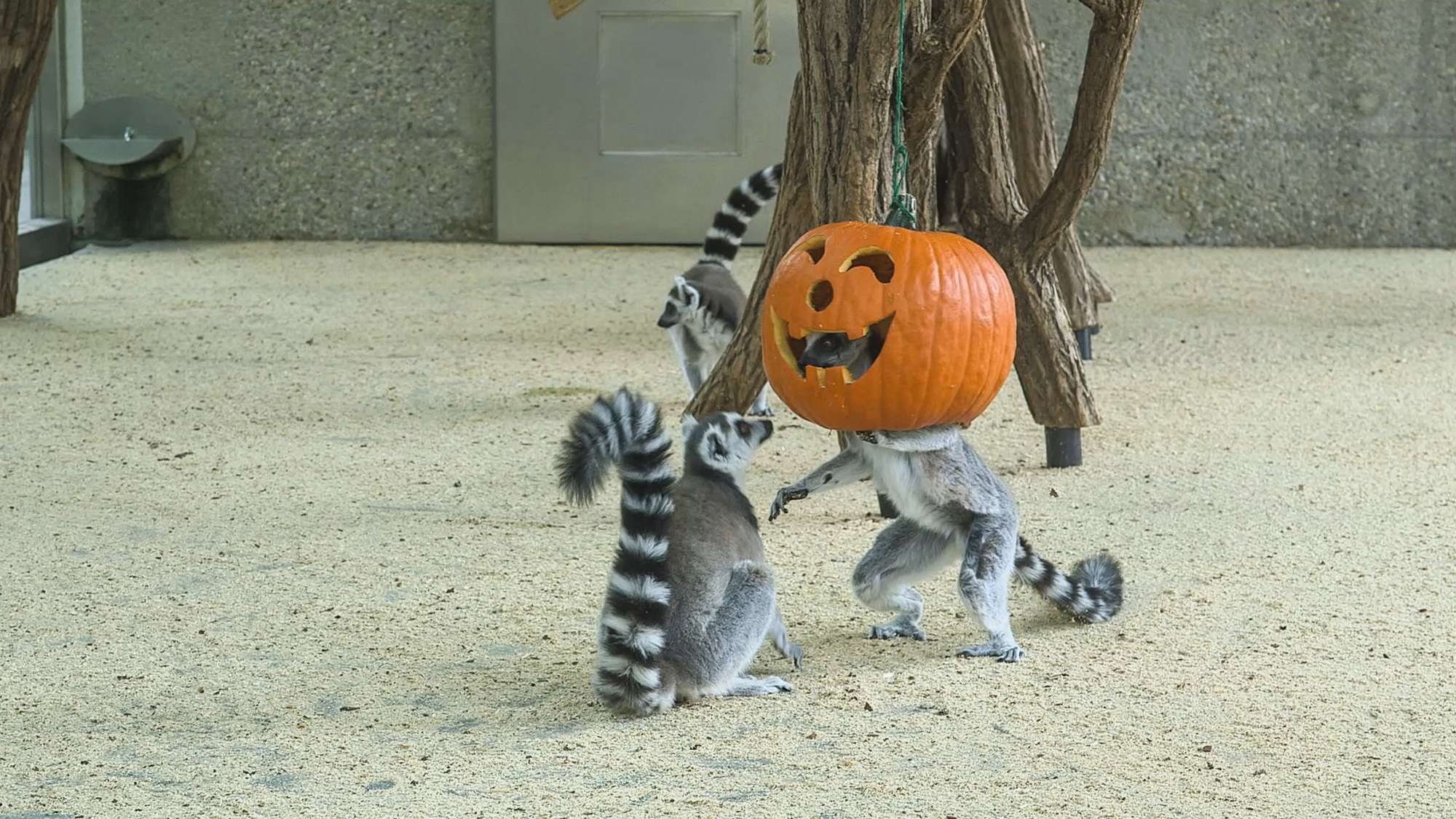 A curious ring-tailed lemur put its head inside a carved pumpkin, creating a more comical than scary Halloween photo.

The playful footage was taken at Vienna’s Tiergarten Schonbrunn zoo, the oldest in the world, as the ring-tailed lemurs enjoy a holiday treat. The species is about the size of a cat and weighs 6 pounds, averaging 17 inches from head to the base of their 24-inch tail.

The pumpkins, filled with tasty snacks, were placed in the cages and hung on strings as enrichment for the animals, as well as entertainment for zoo visitors.

The ring-tailed lemur, a native of Madagascar, loves the fruit of the tamarind tree. They also eat flowers, bark, sap, rotten wood and insects.

Females dominate over males and may compete for overall leadership. Lemurs communicate via 20 vocalizations.

Zookeeper Nicolas Cabon said: “Ring-tailed lemurs are very bright. They couldn’t wait to get the goodies out. And when everything was taken out, they then played with the pumpkins.”

Some lemurs even stuck their heads into the hanging pumpkin, transforming themselves into creepy pumpkin monsters with a single gesture.

Alongside the lemurs, giant pandas also got a pumpkin surprise.

The Schonbrunn female panda Yang Yang was seen calmly inspecting her Halloween treat in panda fashion — she took the goodies out of the orange autumn vegetable piece by piece.

“Pandas mainly eat bamboo. They also like vegetables, such as sweet potatoes, carrots or peppers, but pumpkin is not usually on their menu.”

Pandas live in temperate forests high in the mountains of southwest China.

The pumpkin’s grinning face did not deter the pandas from happily attacking the orange fruit until the insides are exposed — and the tasty treats could be savored.

Renata said: “The pandas didn’t waste any time demolishing the pumpkins, they only had to roll their big paws back and forth a few times, the pumpkins were quickly history.”

The famed Tiergarten Schonbrunn zoo was created in 1752.

The zoo, which covers 42 acres of land, welcomes an estimated 2 million visitors a year eager to see the 8,000 animals from 700 different species.

The ancient buildings at the center of the various enclosures have been frequently modernized, which helped the zoo win the best zoo in Europe title five times between 2008 and 2018.